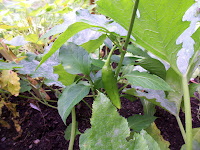 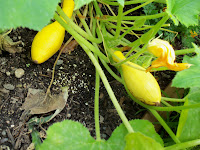 My husband has never before in his life planted anything. Really. This year, one of his coworkers showed DH his garden and he was bitten with the bug. Enthusiastic but clueless, he embarked on his first gardening adventure. First he bought wood to make a raised garden. Then he put it squarely in the shade. This was in April. Of course, in April there no leaves on the trees and there was plenty of sun in his chosen spot. I tried to point out to him the obvious: his garden would be in shade most of the day when summer rolled around. He didn't believe me and there the garden stood. He filled his little plot ( 4ft by 8 ft) with dirt and planted 1 package of zucchini seeds and bought 1 tomato plant. Every day he went out and watered his garden. It was a sad little garden indeed. I borrowed a book from the library on gardening in a small plot. He never opened the book and back to the library it went. After all, real men don't need directions. Along came Father's Day and the kids & I trotted down to home depot and bought everything that was left on the shelf. Being that it was June, there wasn't much. However, we were able to get 2 Yellow Squash plants, 1 Hubbard Squash ,Basil, Jalapeno and 2 other Hot Peppers, Cherry Tomatoes, Big Boys and Roma. We also bought a flat of marigolds to put all around the outside of the garden to keep away animals. DH was so happy, I  think it was his best Father's Day ever.
Everyday he goes out and waters and talks to his little garden. While growing is slow (not enough sun) we are finally are beginning to harvest some vegetables! So far we have 6 zucchini, 2 summer squash, one jalepino and 4 cherry tomaotes! 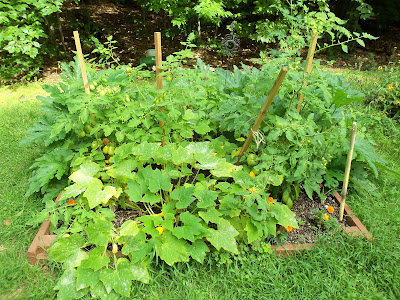 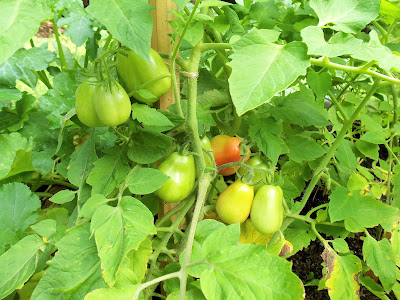 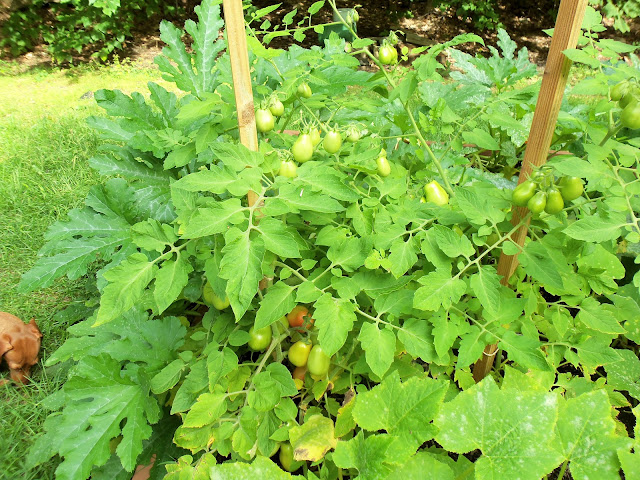 While DH was gone today, I made zucchini bread and zucchini boats. He is eating the bread as I write this post!  He is so happy about his new hobby. He is making plans for more beds next year (in the sun!) and a variety of vegetables. There is nothing like organic vegetables, fresh from your own garden!