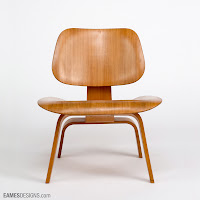 I get netflix online, and while they don't have a big selection, they do have lots of movies that I never would have thought of seeing if they hadn't shown up in my netflix suggestion list. Last weekend I found a little gem, a documentary called  Charles & Ray Eames: The Architect and The Painter. I knew that the Eames chair was an iconic piece of mid-20th century design which had withstood the test of time, but knew nothing about the designers. Wow, was I happy I took the time to watch this movie. Charles & Ray were a charming, brilliant, creative, quirky couple.  She was an painter, and he was architect (though he left college after only two years because he advocated for Frank Lloyd Wright and they considered him too modern). They married in 1941 and began designing molded wooden splints and stretchers for the Navy during WWII. They were experimenting with bending plywood, and came up with a design for a chair. In the process of designing they tested out the forms on people of all shapes and sizes so they could make something that was a universal fit, comfortable for most people to sit on. In 1946, Evans Products began producing the Eameses' molded plywood furniture. Soon production was taken over by Herman Miller, Inc., who continues to produce the furniture in the United States to this day. 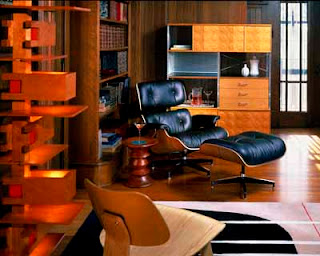 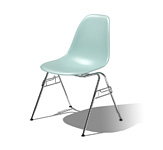 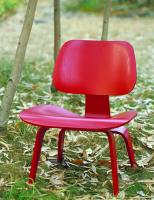 They also produced molded plastic chairs and metal chairs. They designed furniture that would be durable and used in industrial design. In the 1960s & 70s they were everywhere, in schools, airports, hospitals, you could not escape them! The couple designed a variety of whimsical toys and furniture pieces specifically for children, including coat racks, molded plywood animals, small-scale chairs and tables, elaborate cardboard-and-paper masks, and brightly colored building blocks.They also loved to collect toys and their office was filled with all sorts of whimsical toys and trinkets. 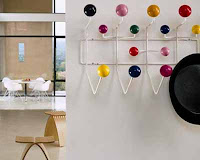 Ray was also an influential artist, her designs are easily recognizable as being important aspects of the mid-century interior design. She also designed fabric.
Charles and Ray Eames collected numerous objects from their travels.  The figure of a black wooden bird has stood in the centre of their living room for over fifty years.  The bird is also seen in many of the Eameses’ photographs. It's interesting to note that birds are trending right now along with mid-century design. Wonder if Ray's bird has anything to do with it! 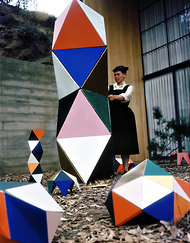 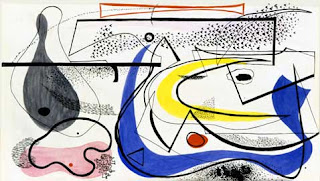 These photos can be found at http://eamesfoundation.org/

The photos of the Eames chairs chairs are via http://www.hermanmiller.com/products/seating/side-chairs/eames-molded-plywood-chairs.html 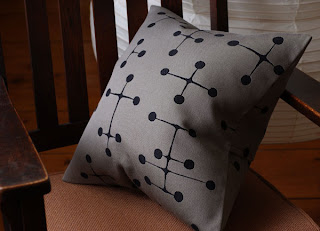 
"To whom does design address itself: to the greatest number, to the specialist of an enlightened matter, to a privileged social class? Design addresses itself to the need. "  Charles Eames
I was so impressed by this couple and their views on design and life. There is so much to them than I have written here, so if you are looking for a good movie to watch, Charles & Ray Eames: The Architect and The Painter can be viewed online!
Posted by Syndi White at 4:15 PM