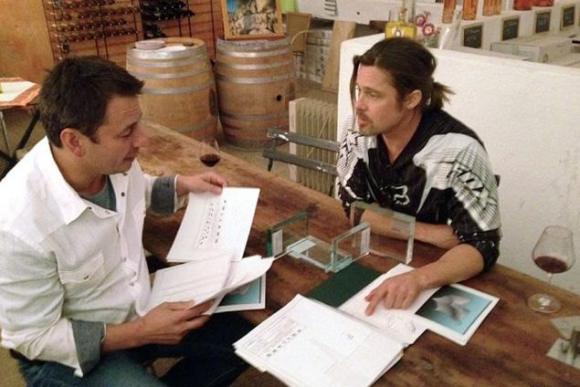 According to the article, Brad loves design from the Art Nouveau, Arts & Crafts and Art Deco movements. "I've been doodling ideas for buildings and furniture since the early 1990s, when I first discovered Mackintosh and Frank Lloyd Wright" says Pitt in the AD article."Actually, I found Wright in college. It forever changed my life."
For those of you who are not design junkies, like me and Brad (though I bet he would rather be referred to as a  design connoisseur, here is a little design history. Rennie Mackintosh was part of a design group of four in Glasgow, Scotland. They met when they were taking classes at the Glasgow School of Art. Mackintosh married Margaret Mac Donald, and Herbert MacNair married her sister Francis MacDonald. These four became known as leaders of the "Glasgow School" movement. They worked on architecture, interior design, art and crafts (fabric designs , wallpaper, embroidery, furniture, paintings and accessories).  Much of Mackintosh's work combined his own designs with his wife's, whose work was full of flowing, floral styles which complemented his angular, straight-lined designs.
Brad Pitt's furniture designs are composed of  both straight, angular lines and flowing, one line curves. When asked about the appeal of an uninterrupted line, Pitt explains that there’s a metaphorical element that’s difficult to articulate. “It started with my introduction to Mackintosh’s Glasgow rose, which is drawn with one continuous line,” he says. “But for me there is something more grand at play, as if you could tell the story of one’s life with a single line.”
OK, here is where Brad and  diverge. I always thought of the Glasgow Rose as a block design, something you would see in stenciling, or stained glass, not as a continuous line.
An important element of Glasgow style was the importance of Celtic imagery, with motifs and style of lettering inspired by carvings on seventeenth century tombstones. A very popular motif was a cabbage like rose, the 'Glasgow Rose' which was adapted from Aubrey Beardsley  and employed widely within Glasgow Style design. The Glasgow Rose was also adopted by English designers of stained glass, and furniture. (via Artsandcrafts.org/uk 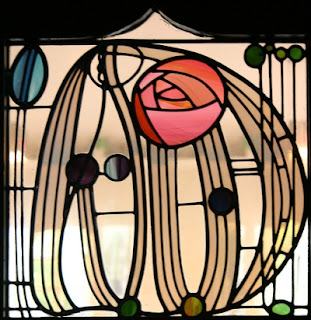 "There is something more grand at play, as if you could tell the story of one's life with a single line — from birth to death, with all the bloody triumphs and perceived humiliating losses, even boredoms, along the way," the actor said. (Wow Brad, aren't you the deeply philosophical guy. Who knew.)
Here are some examples of Mckintosh's work which inspired Brad Pitt: 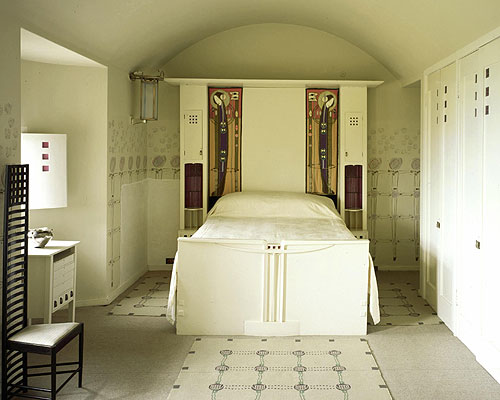 So now that you have read Brad's explanation of his inspiration, and have viewed some of the original inspirational  designs, now its time to look at Brad's new furniture line.... these are all from Architectural Digest 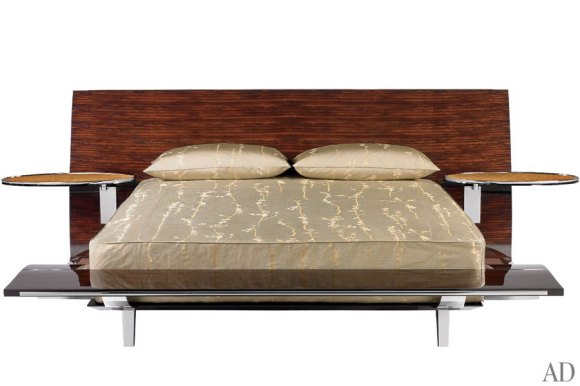 via AD: In addition to the bed—only nine will be made, each in different materials—the Pitt pieces include a dining table, a cocktail table, several side tables, a few club chairs, even a bathtub for two in Statuario Venato marble. 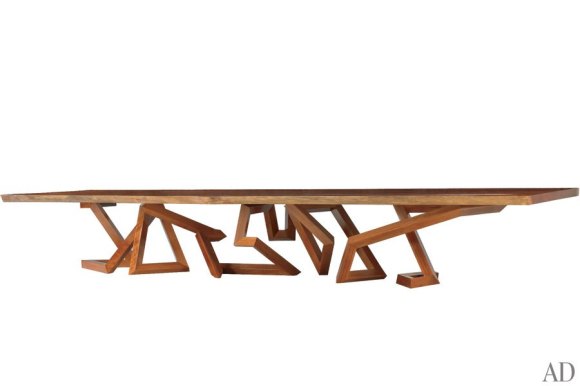 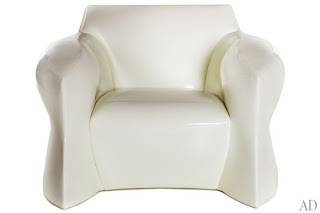 This chair is covered in Patent Leather. 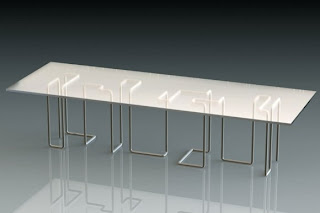 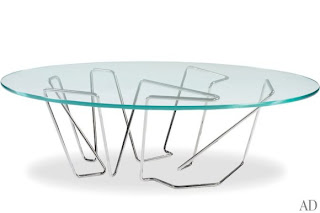 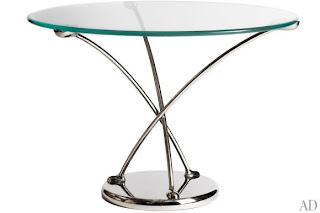 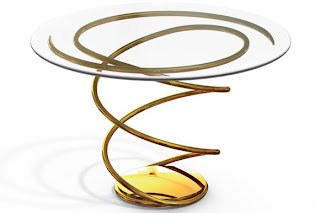 This table base is covered in 24 kt Gold
via AD:  Many of the designs incorporate the idea of a single line. That line can be geometric, as in the case of a 17-foot-long wood dining table whose jagged base dramatically zigzags at unexpected angles. Or it can be sinuous, as with a glass-top side table that features a wispy spiraling metal base finished in 24K gold.

Here is my opinion of Brad's designs: They seem to draw their inspiration, not so much from the Arts and Crafts movement, but rather from a combination of midcentury  (reminiscent of The Eames designs) and "modern" furniture designs of the late 1970s, early 80s. (Think lots of chrome, brass and glass).  Honestly, the only item that reminds me of Arts and Crafts is the wooden table with the continuous angular wooden base. If you take a look at Arts and Crafts furniture, you will typically see heavy straight-line, angular wood.  Of course, he also says he draws influence from Art Deco, which did incorporate metal and glass into the designs.
I just do not see his designs becoming the new trend anytime soon.  I hope not. I would not buy one of these pieces, even if the cost was under $100. But that's just my 2 cents. What's YOUR opinion of Brad Pitt's furniture designs? Would you buy them for your own home?